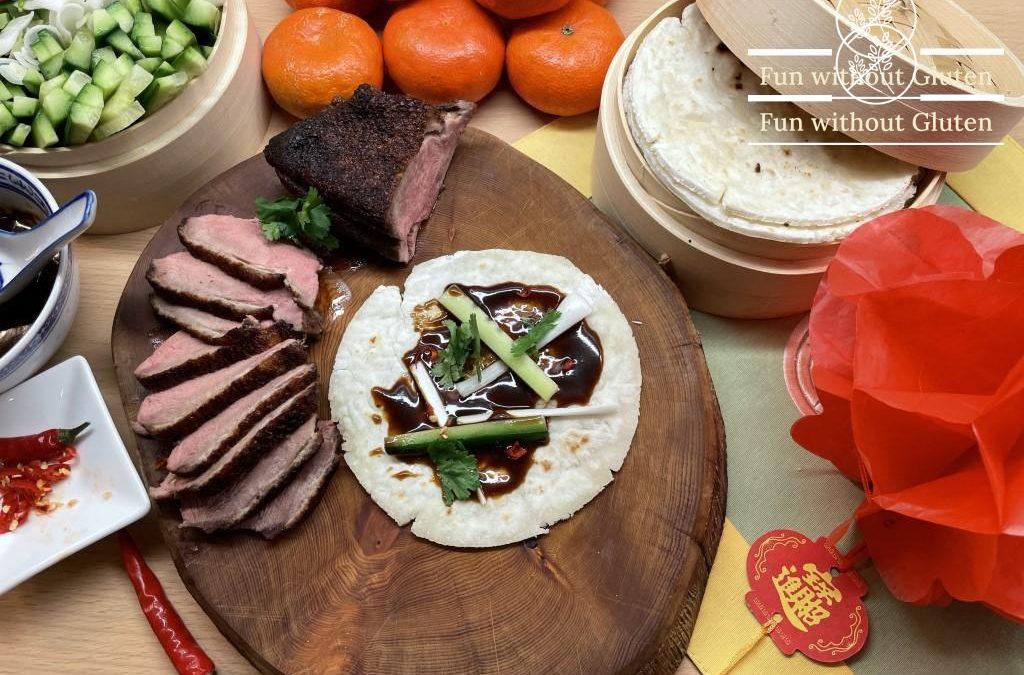 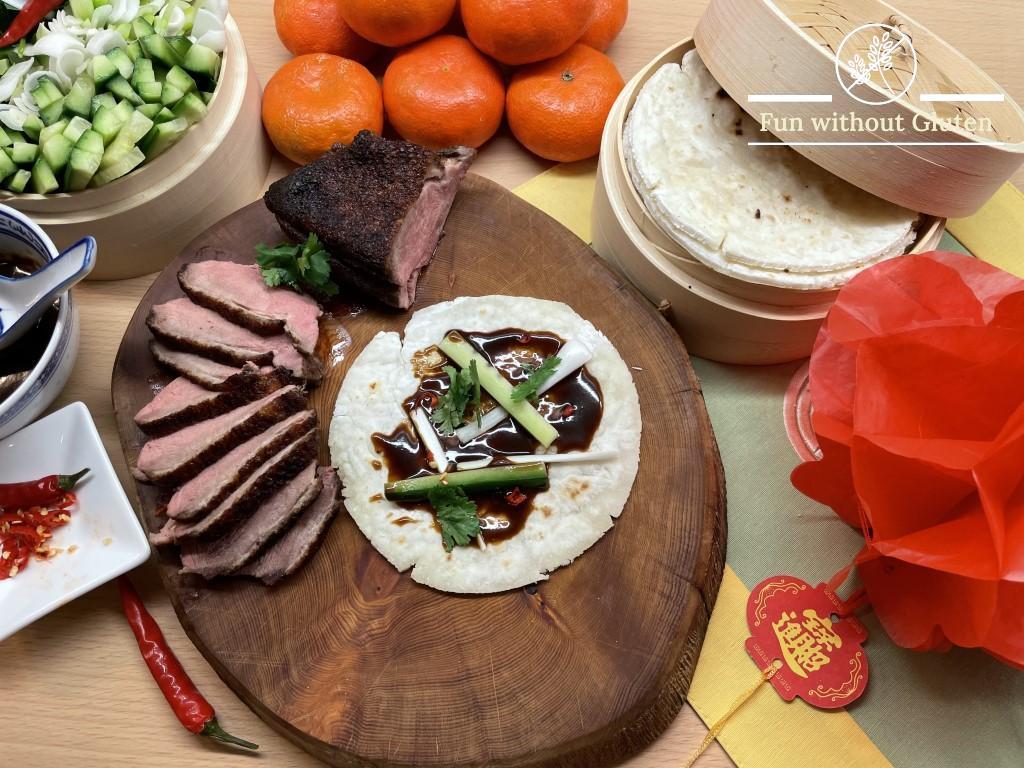 Here’s a well-known dish that everyone loves to eat – Peking Duck with Mandarin pancakes, especially during Chinese New Year, which is the next festival on the calendar this year – 12th February to be exact, ushering in the Year of the Ox. In northern China, the pancakes (called chun bing) are served to welcome Chinese New Year (Spring Festival) and pray for a good harvest from the spring crops. Not only is duck added as a filling, but stir-fried vegetables and eggs are cooked separately, and each diner helps themselves, similar to assembling a burrito.

How many of us suffer when we go to have a meal at a Chinese restaurant and see the trolley whiz by with a whole roast Peking duck and steamed bamboo baskets filled with warm pancakes, knowing that you can’t enjoy the crispy duck pancakes because they are made with wheat flour? Even if you opt not to eat the pancakes, the duck is glazed with gluten soy sauce, so really all that’s left are the cucumber sticks and spring onion shavings…Bon appetit!

In China, making homemade Peking duck is not common as many homes do not have an oven and it is far easier to resort to buying one already made, as in most countries. Not so straightforward if you are after a gluten-free duck, but if you ask the chef or manager nicely at your local Chinese restaurant, I reckon most would be happy to make a pre-ordered duck using a gluten-free soy sauce, especially if you donate a full bottle to their restaurant. This gesture will assure them that you mean business!

Store-bought or Restaurant Hoisin sauce usually has gluten too, which is why I have added a very easy homemade gluten-free recipe. It looks and tastes very similar to the real thing.

Making this meal at home isn’t as daunting as it looks. Whether you choose to make a whole Peking duck or several portions of Peking duck breasts, they both just need a bit of planning and preparation to achieve that Peking duck experience. Everything can be made in advance while the duck is drying in the refrigerator. Then while the duck is cooking, you can set the table, plate up the sides and reward yourself with a gluten-free, authentic Peking duck meal.

Jump to the different recipes for the complete Peking duck meal: 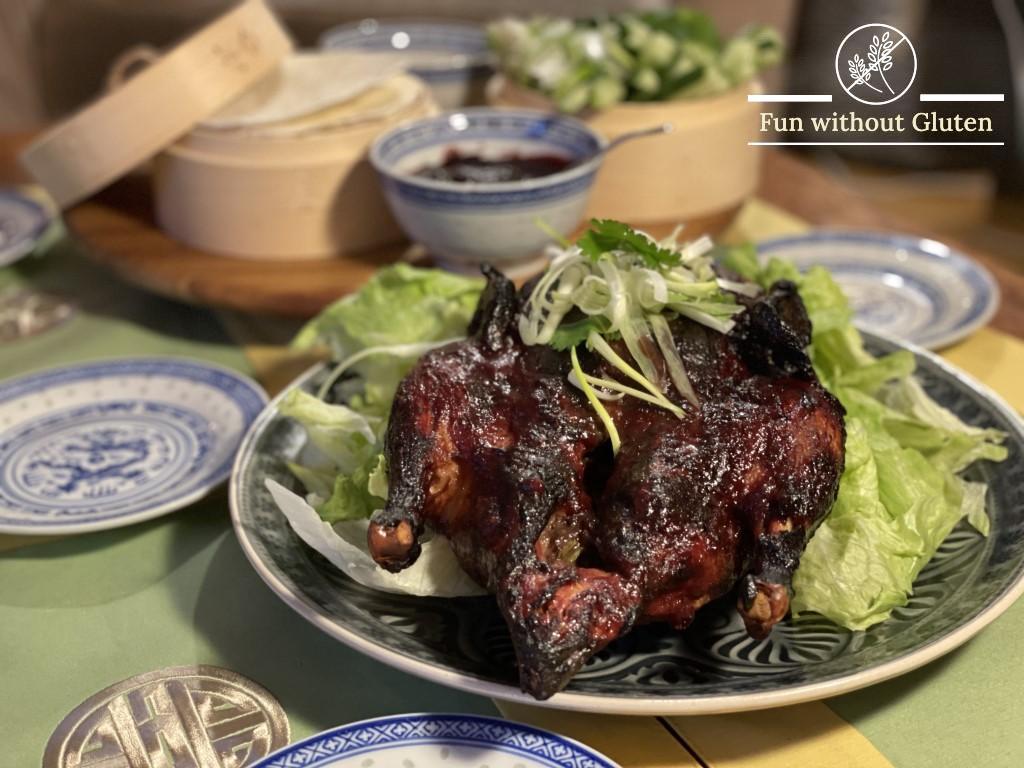 For the whole Peking duck:

1. Wash and pat the duck dry with paper towels.

2. Rub the coarse salt inside the duck’s cavity and outside on the skin. 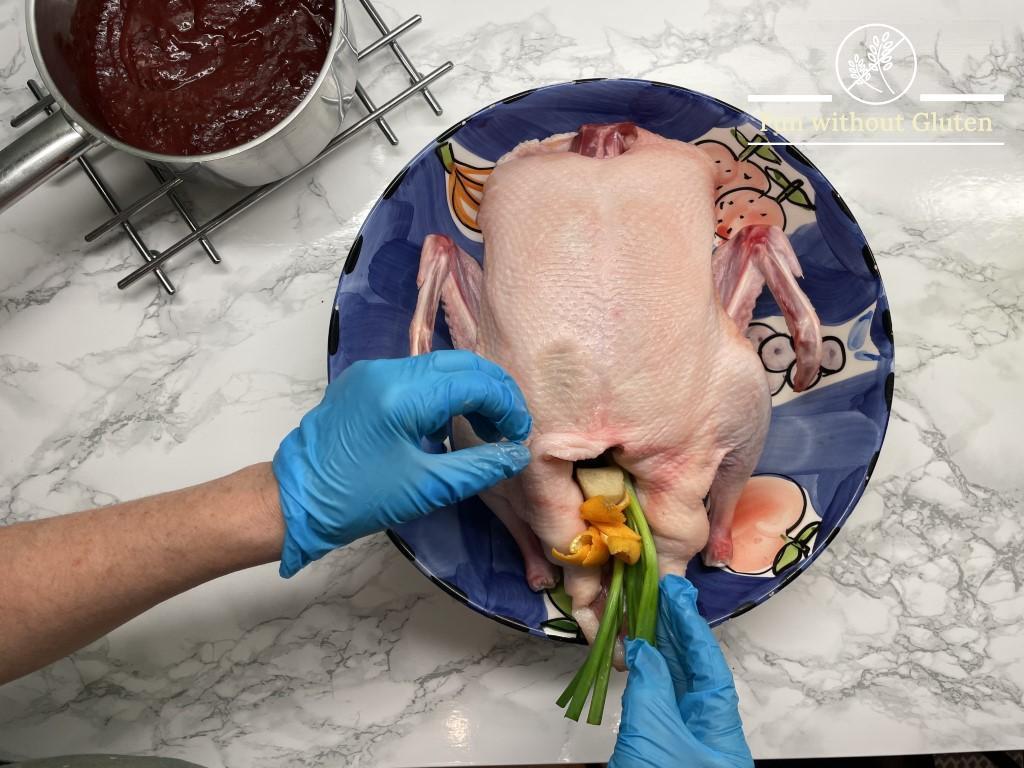 3. Stuff the cavity of the duck with ginger pieces, spring onions and mandarin peel.

4. Mix the Tamari soy, Shaoxing wine or Vodka and five-spice in a small bowl. 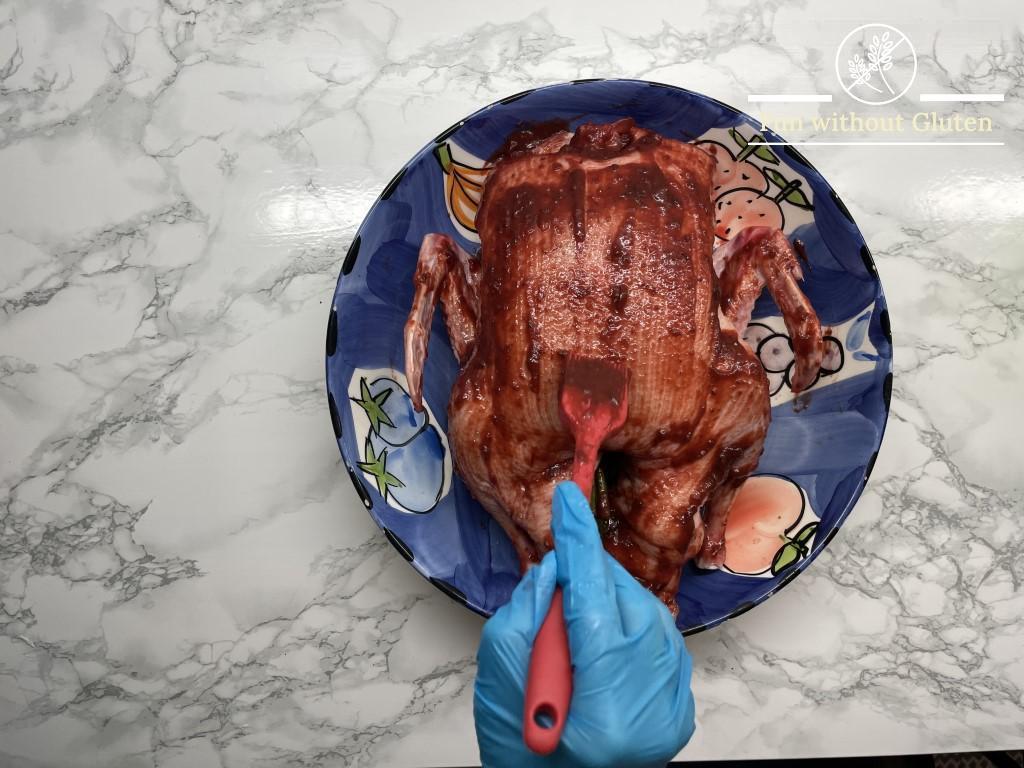 5. Brush the duck all over with half the Tamari mixture. Put aside the remainder for further glazing when roasting.

6. Leave for 4 hours or overnight, in the fridge uncovered. Keeping it uncovered, ensures a crispier, drier skin.

7. Poke the duck breast a few times, piecing the skin.

8. Place a roasting pan on the stove over 2 burners at medium heat and fill with 5cm of boiling water.
9. Set a rack over the roasting pan and lay the duck breast-side up.
10. Cover tightly with foil.
11. Steam the duck for 45 minutes, checking the water level every now and then. (steaming the duck first melts away some of the fat and shrinks the skin).
12. Preheat the oven to 190 C/375 F.
13. Remove the foil and place the duck in a clean roasting tray.
14. Brush the duck with the remaining Tamari mixture to glaze it.
15. Roast the duck for one hour, glazing and basting often.

16. Pierce one of its thighs to check for doneness. If the thigh juices run clear, the duck is ready.

17. If it needs a few minutes longer, cover the duck with the foil used earlier and return to the oven until ready. Another way to test for doneness is if the legs wiggle easily.

18. Keep covered with the foil and add a dry, clean tea towel to cover the duck while setting the table with all the condiments and heating up the pancakes.

19. Carve the breast into thin slices, then continue to shred the meat off the legs and wings. Make sure to keep the skin to add to your pancakes.

20. Place meat, skin, a sliver of spring onion, a piece of cucumber, some fresh coriander leaves and some Hoisin sauce on each pancake. Fold or roll up each one before eating. 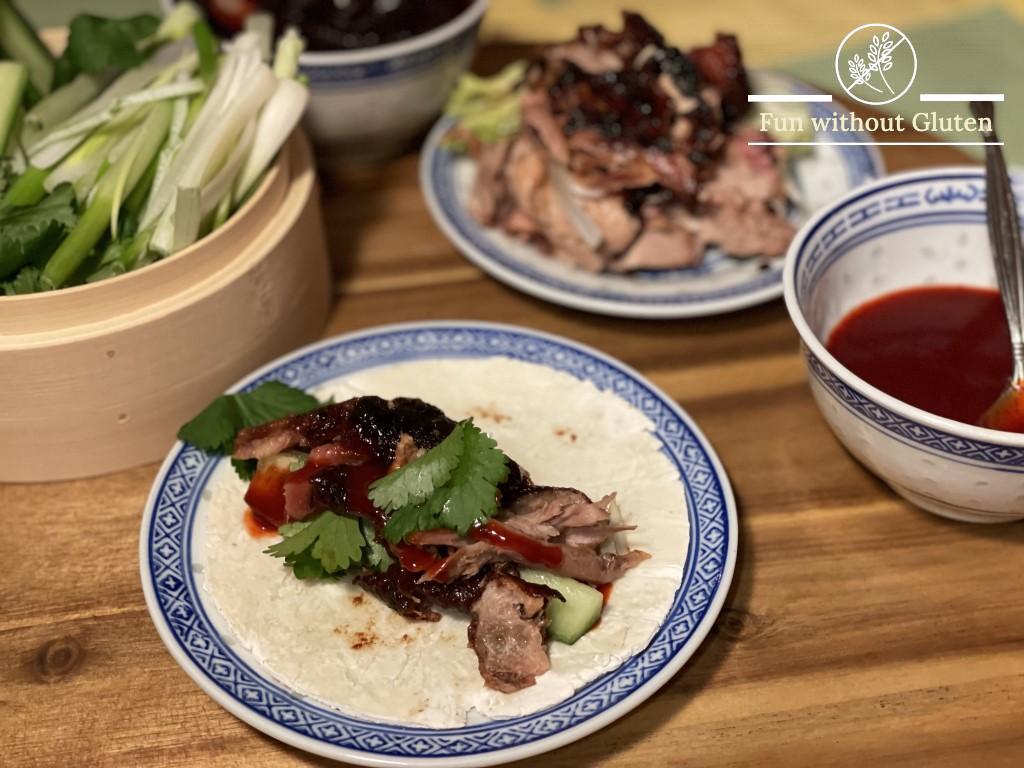 For the Peking duck breast:

2. Mix the Tamari soy, Shaoxing wine or Vodka and five-spice in a small bowl. 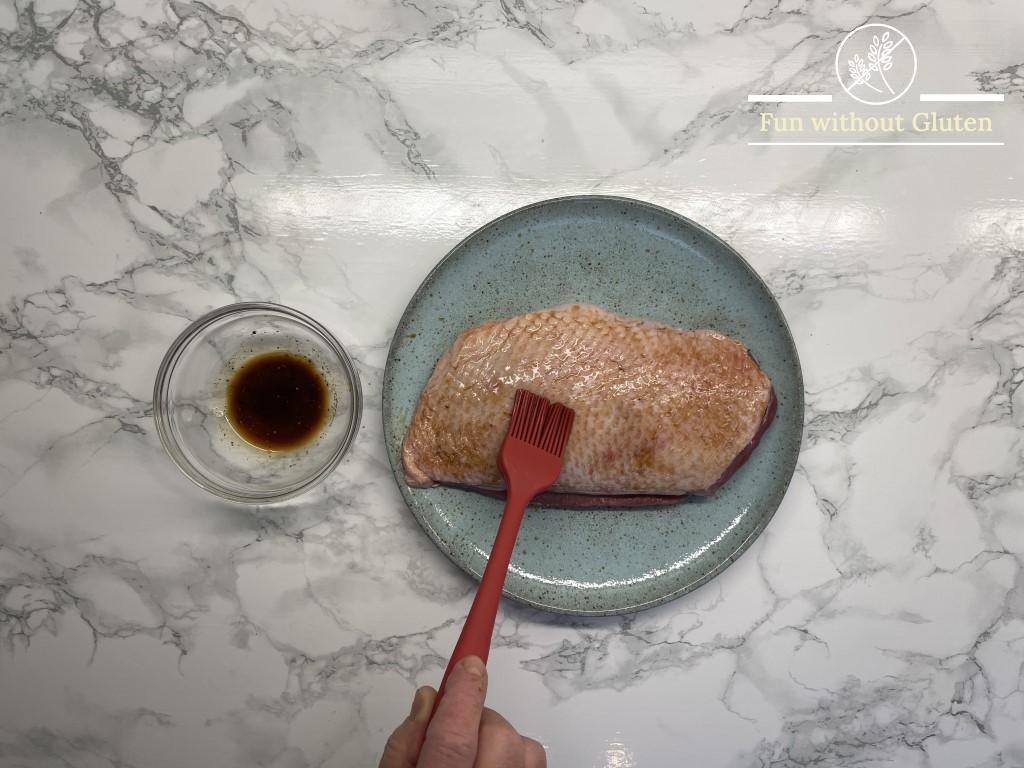 3. Brush the duck all over with the Tamari mixture.

4. Leave for a minimum of 30 minutes or overnight, in the fridge uncovered.

5. Heat a frying pan on medium-high heat. Add 1 tablespoon of sunflower oil to coat the pan.

6. Sear the duck breasts, skin side down for around 6 minutes. Move them often so the skin crisps up nicely and the duck fat renders out.

7. Turn the heat down to medium and fry for a further 6 minutes, checking often that the skin is not burning.

8. Preheat the grill/broiler to medium-low heat.
9. Place the duck skin-side down on a grilling tray and grill for 5 to 8 minutes for medium. Cook for 10 to 12 minutes if you like your duck well-done. 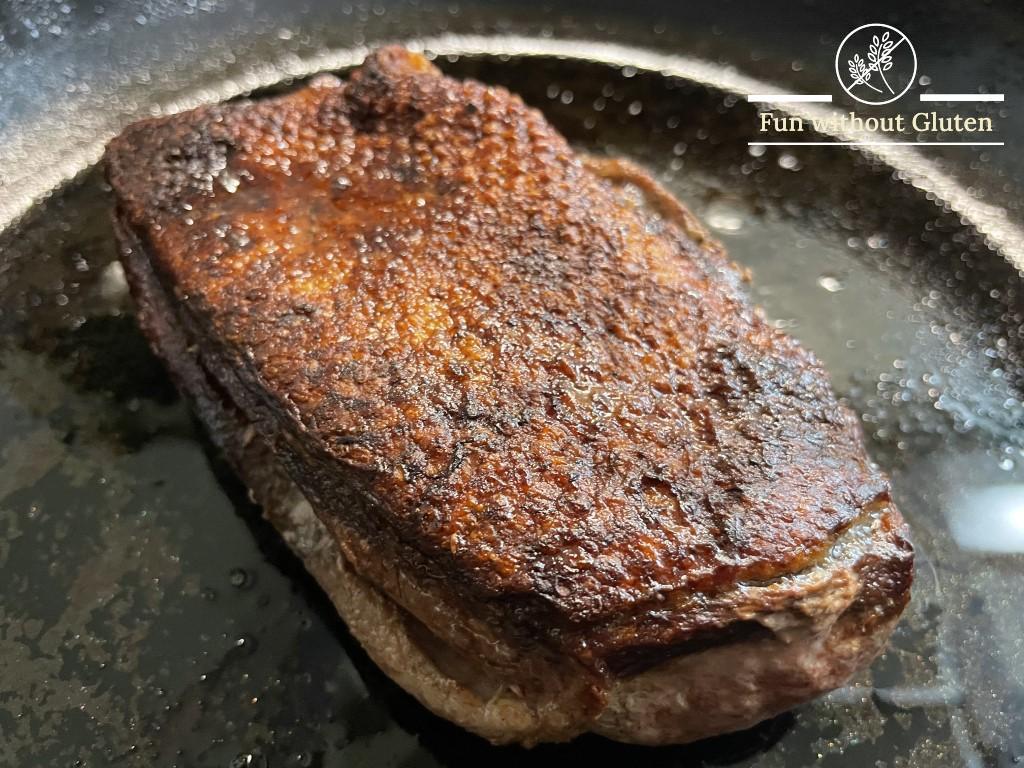 10. Turn the duck breasts over so that the skin is side up, continue to grill for a further 3 to 5 minutes. The skin should start bubbling up and becoming crispy. Without burning the skin, turn the grill up and crisp it up further. Make sure to not take your eyes off it during this step.

11. Remove from the grill and rest for 10 to 15 minutes, covered with foil.
12. Carve the duck breast into thin slices, using a sharp knife.
13. Place meat, skin, a sliver of spring onion, a piece of cucumber, some fresh coriander leaves and some Hoisin sauce on each pancake. Fold or roll up each one before eating. 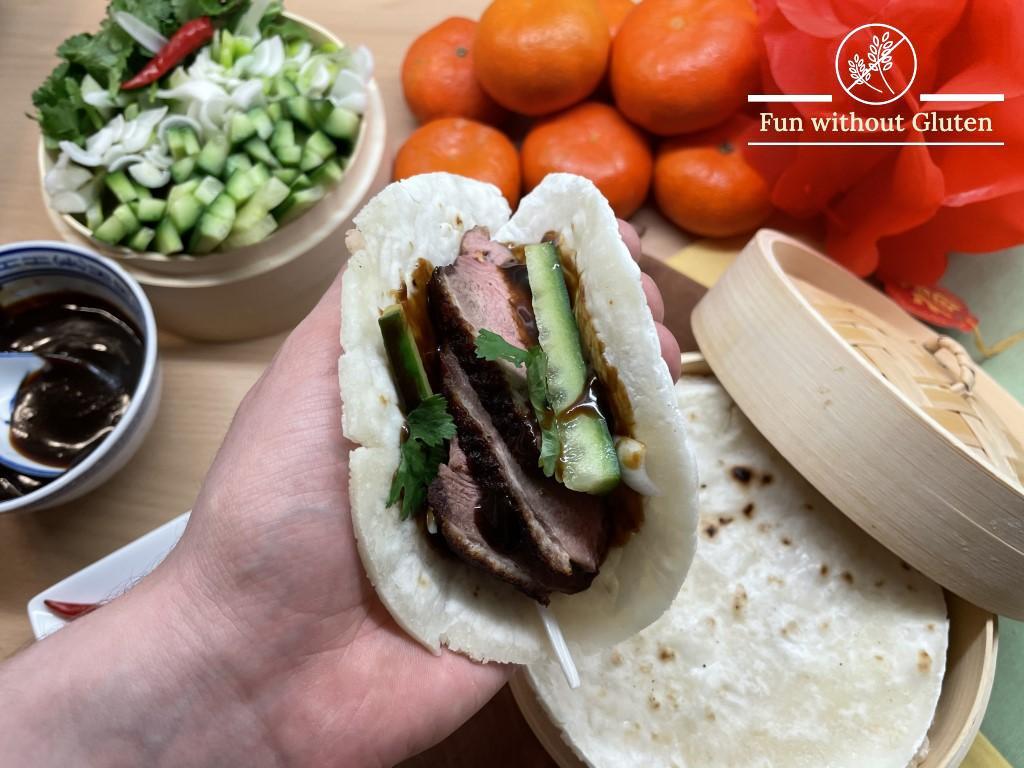 Ingredients:
For the gluten-free pancakes: 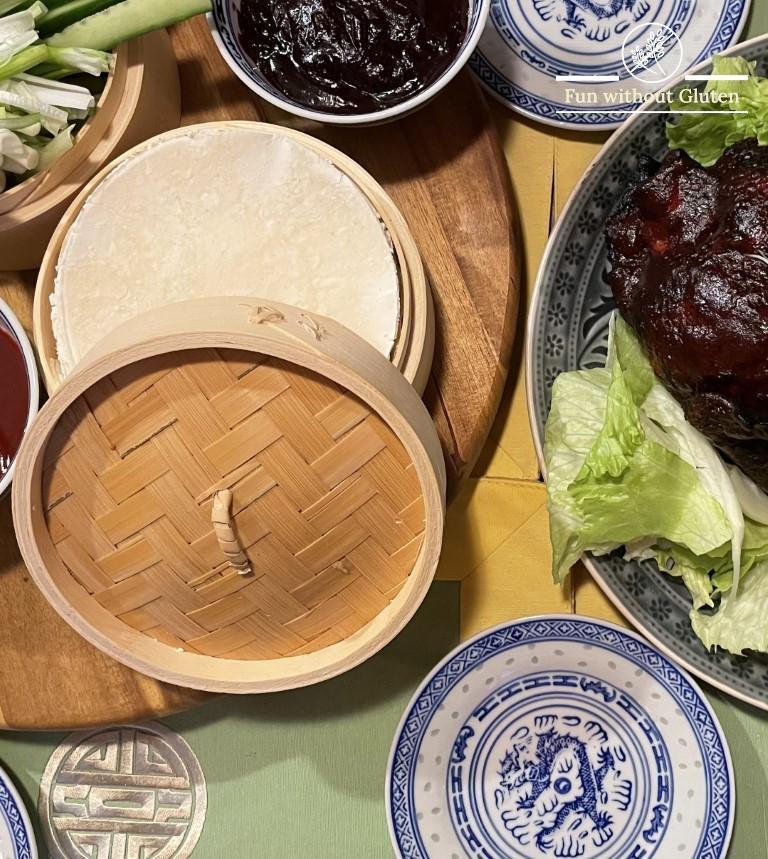 1. Whisk to combine both flours and salt in a large bowl.

2. Make a well in the middle and add 150ml of boiling water, olive oil and vanilla extract, mixing with a wooden spoon. 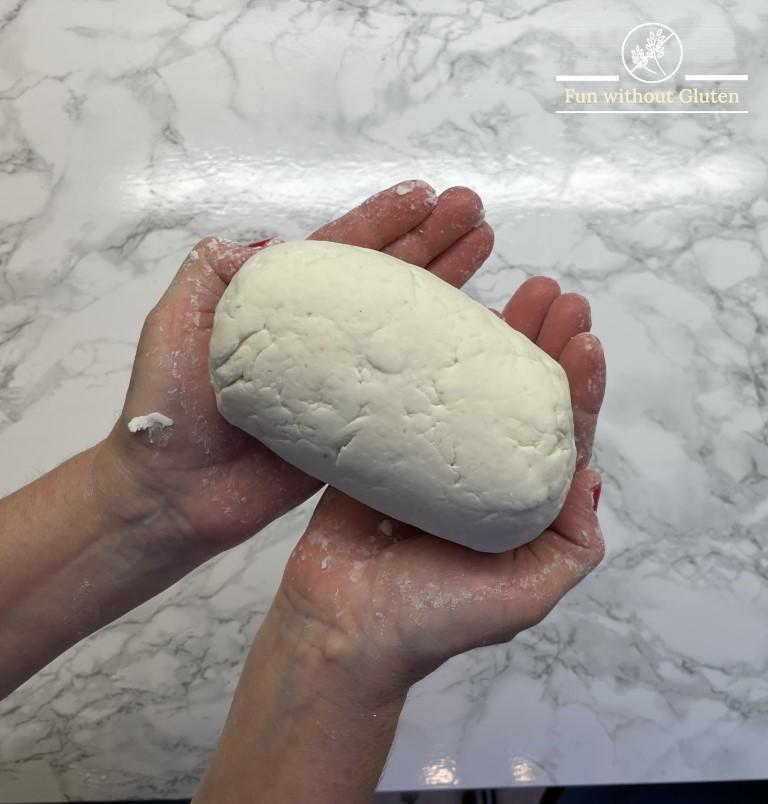 3. Using your hands (use latex gloves if the heat is too much), knead the dough, adding the remainder of the 100ml water slowly until the dough is smooth with a slight sticky touch.

4. Cover the dough in plastic wrap and allow it to rest for 30 minutes at room temperature. 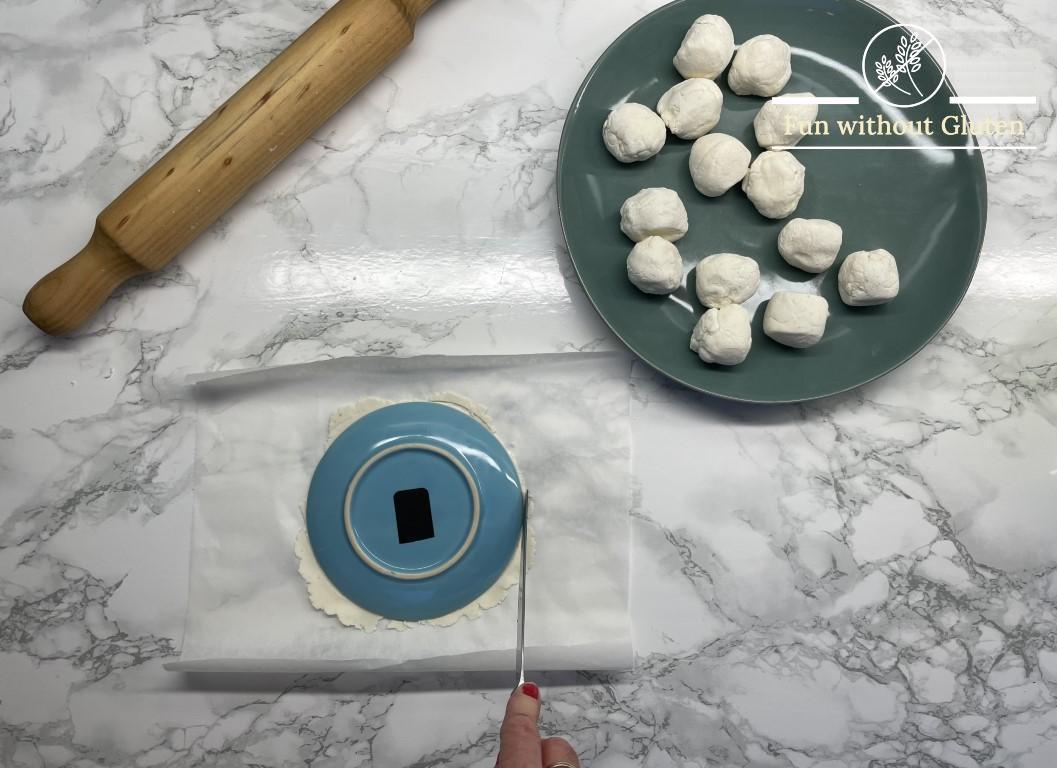 7. Between two sheets of baking paper, press each ball into a patty with your hands and roll out to 13cm diameter pancakes. Trim around the edges to form a circle, using a small plate.

8. Heat up a crepe pan or frying pan to high heat, then turn down to medium. 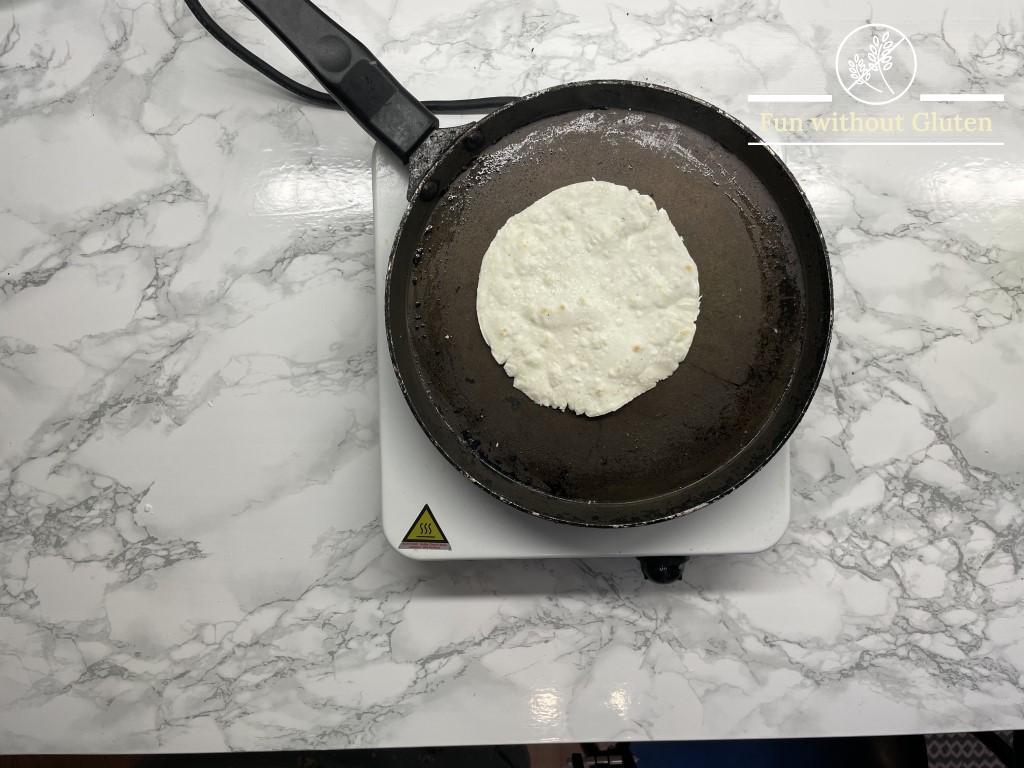 9. Once the pan is ready, brush each pancake with a little oil and add one pancake at a time to fry for around 1 minute on each side or until light brown spots appear.

10. Press down slightly on the sides of the pancake with the spatula – this will add some air bubbles to the pancake, making it lighter in texture.
11. Repeat with the remaining pancakes.
12. Cover and put aside until serving time.
13. When ready to serve, you can heat up the pancakes using the traditional method by using a wok or pot with some water and place a steaming rack over the water, then add a bamboo steamer on top of the rack.
14. Line the bamboo steamer with 2 layers of baking paper.
15. Steam all the pancakes at once for around 10 minutes until they are soft.

16. Alternatively, cover the pancakes with some plastic film and zap them in the microwave for several seconds until they feel warm.

For the pancake filling:

Ingredients:
For the pancake filling:

For the gluten-free Hoisin sauce*:

1. Combine all the Hoisin ingredients in a small pan and bring to the boil.

2. Immediately, lower the heat and simmer until it thickened, stirring constantly for about 5 minutes.

3. If it appears too thick, add a tablespoon of water to loosen the sauce. Continue adding more water if you prefer the sauce to be runnier.

4. Pour into a small serving bowl and allow to cool. 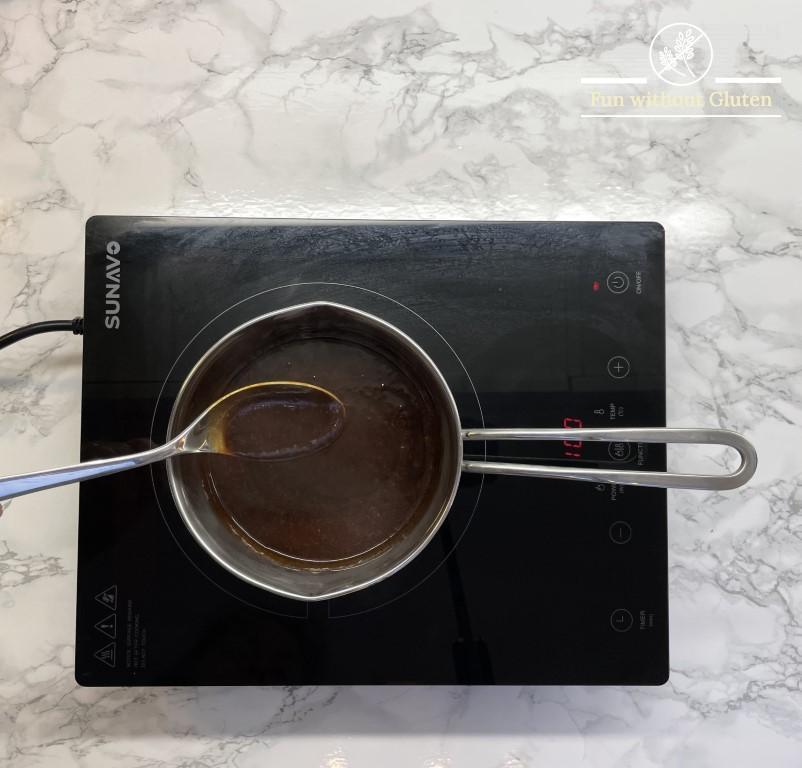 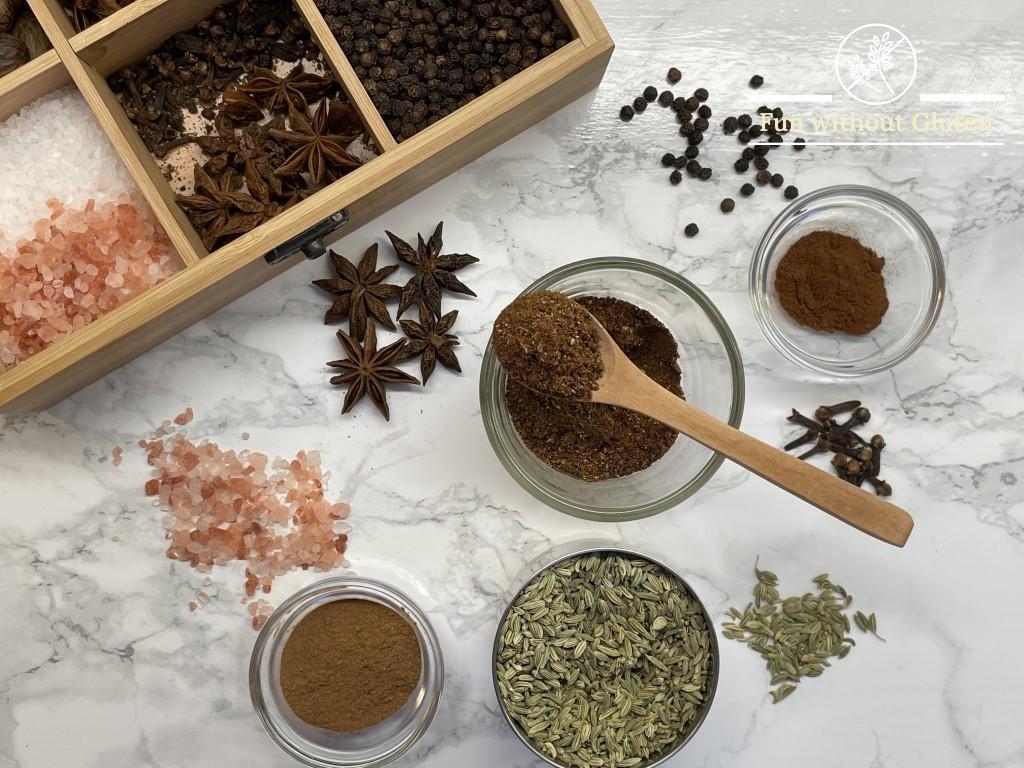 For the homemade five-spice powder:

Grind all the above ingredients in a food processor or coffee grinder.

Store in an airtight glass jar.