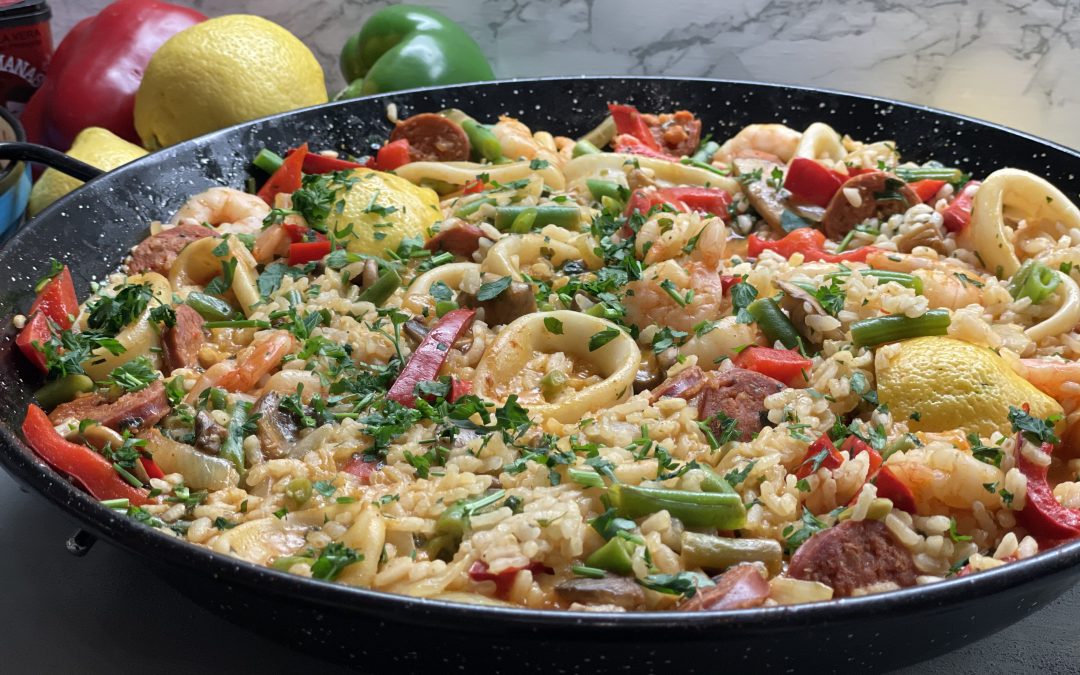 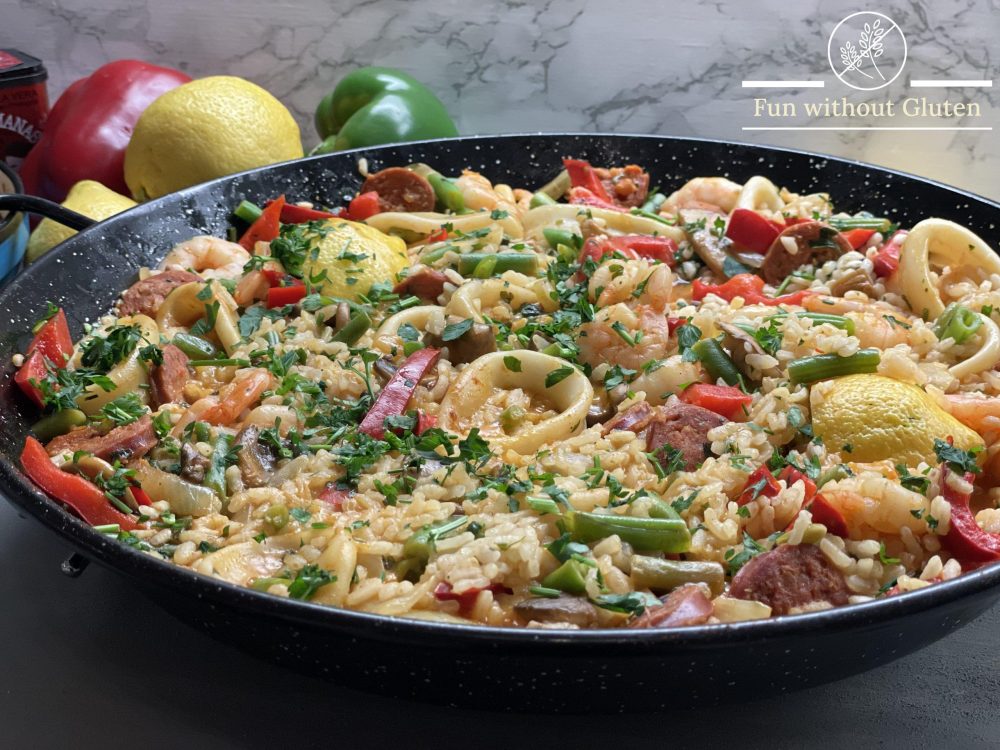 Paella is a versatile Spanish rice dish that is great to serve to guest or family on a special occasion. Not only do all the seafood, meat and vegetables look spectacular, but every spoonful is also a magnificent combination of flavours and textures. Originating from Valencia, paella got its name from the actual pan used, incidentally called paella in Spanish. 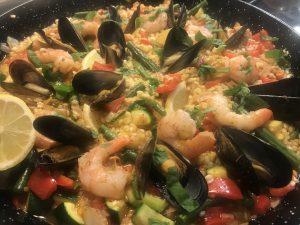 The recipe I am sharing with you is for a standard Spanish paella. Once you have learnt the basics of making paella, nothing is stopping you from adding extra ingredients like fresh mussels, chicken, ham, octopus or beans. If you prefer, leave out the meat and add your favourite vegetables to make a vegetarian paella.

There are few things to consider when making Paella:

CHORIZO in Spanish means sausage. There are two types of chorizo: dried and fresh. Dried chorizo is cured using cooked pork and smoked paprika, originating from Spain and used for paella and other national dishes. Whereas fresh chorizo is uncured and raw, used mainly in South American to barbecue/grill. As Spanish chorizo is starting to appear in many other dishes besides Paella, it seems to be readily available in most supermarkets, plus most are gluten-free (double-check the packaging!). Failing that, ask your local delicatessen, where they may have some to slice up for you. Don’t forget to ask if it is gluten-free! 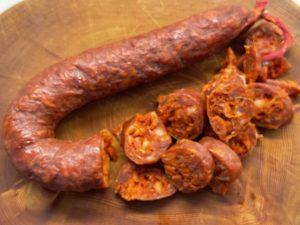 SMOKED PAPRIKA (known as Piementón de la Vera) is the main seasoning used to give its typical Spanish flavour. Although the chorizo already has paprika, a little extra doesn’t hurt. 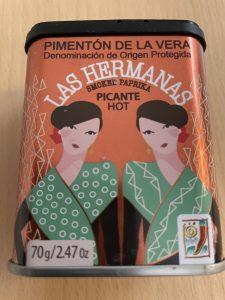 SAFFRON gives the rice the yellow colour paella is known for. Saffron is expensive but as only a few threads are used at a time, it is worth the purchase. To prepare saffron, crumble it first with your fingers (use plastic gloves as the saffron temporarily stains) and leave it to soak in ice-cold water. The cold temperature gently eases out the flavour and colour, rather than warm water. 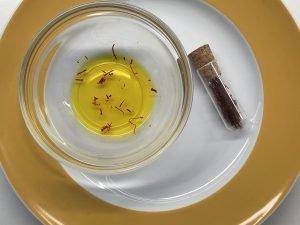 PAELLA RICE is exported worldwide mainly from Spain and sold in International supermarkets or delicatessens. I don’t have a photo of the packet, but here is an unaffiliated link to the Spanish producers illustrating the packets of rice: http://arroztomas.es/en/cebolla/

The trick is to have a PAELLA PAN, which is a very wide, completely flat pan with a thin base. The wide surface allows the paella to cook through a thin layer and create a perfect layer of a crispy base (socarrat), juicy middle and a glorious topping of seafood and vegetables. Most well-stocked kitchen supply stores will have them on sale, otherwise, try Amazon or remember to pick one up next time you visit Spain! 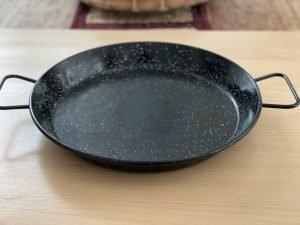 1. Heat 2 tablespoons of olive oil in the paella pan over medium heat. Add the chorizo slices and fry on both sides until seared and crisp.

3. Add the garlic, mushrooms, peppers and smoked paprika to the pan. Stir with the onions for 5 minutes. 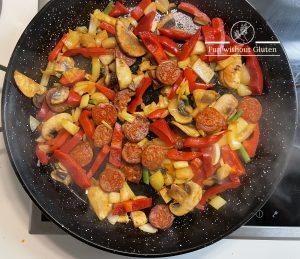 4. Add the last tablespoon of olive oil to the pan, add half of the prawns and calamari rings, stir well, then add the tomato paste. 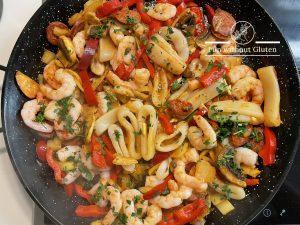 5. Pour in the wine. Allow the wine to evaporate slightly before adding the chicken or vegetable stock and the saffron water. Stir well.

6. When the liquid is bubbling, throw in all the rice. Once the rice is in the pan, it is important not to move it, so that it cooks evenly and gets that crispy (but not burnt) bottom layer. 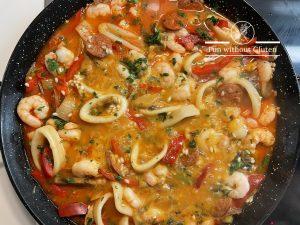 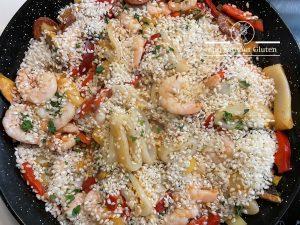 7. Add the green beans or peas and place the remaining prawns and calamari rings on top of the rice. Pour the lemon juice over the rice and seafood. Add some parsley and seasoning. Leave to cook uncovered over medium-high heat for about 10 minutes.

8. Lower the heat and cook for a further 10 to 12 minutes. Don’t be tempted to stir the paella. Instead, shift the pan every few minutes, moving it around and back to the centre of the heat. This ensures even cooking.

9. If using mussels, add these at the end of cooking, covering the pan to create steam. Cook until the mussel shells open. Discard any that remain closed.

10. Serve straight from the pan with lemon wedges, extra parsley and more salt and black pepper, if needed. 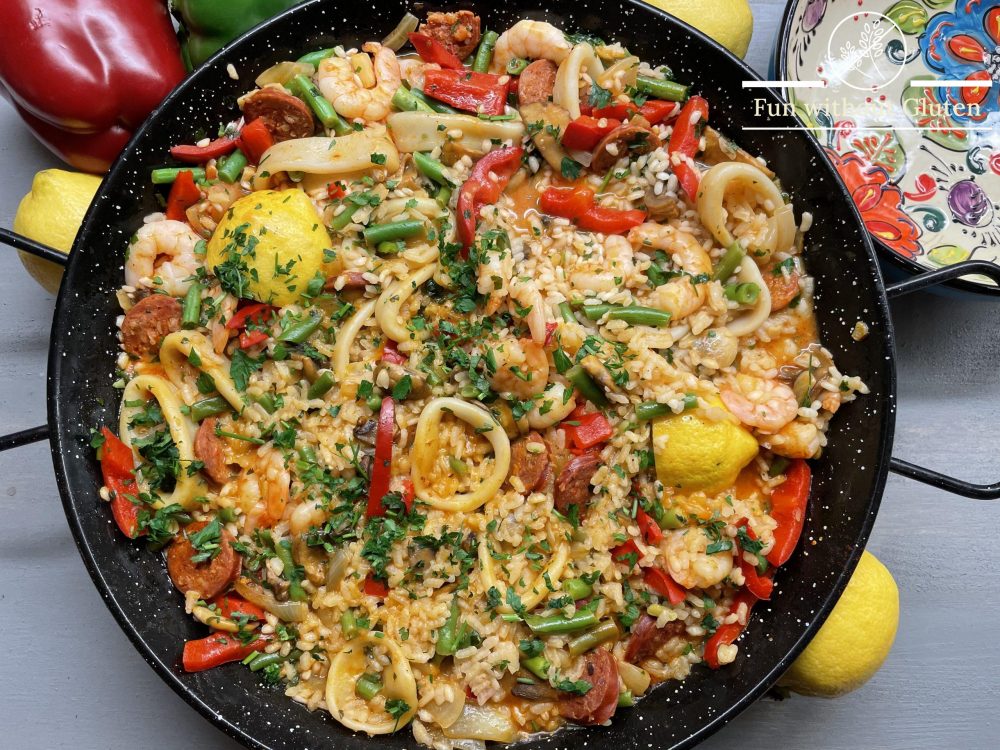