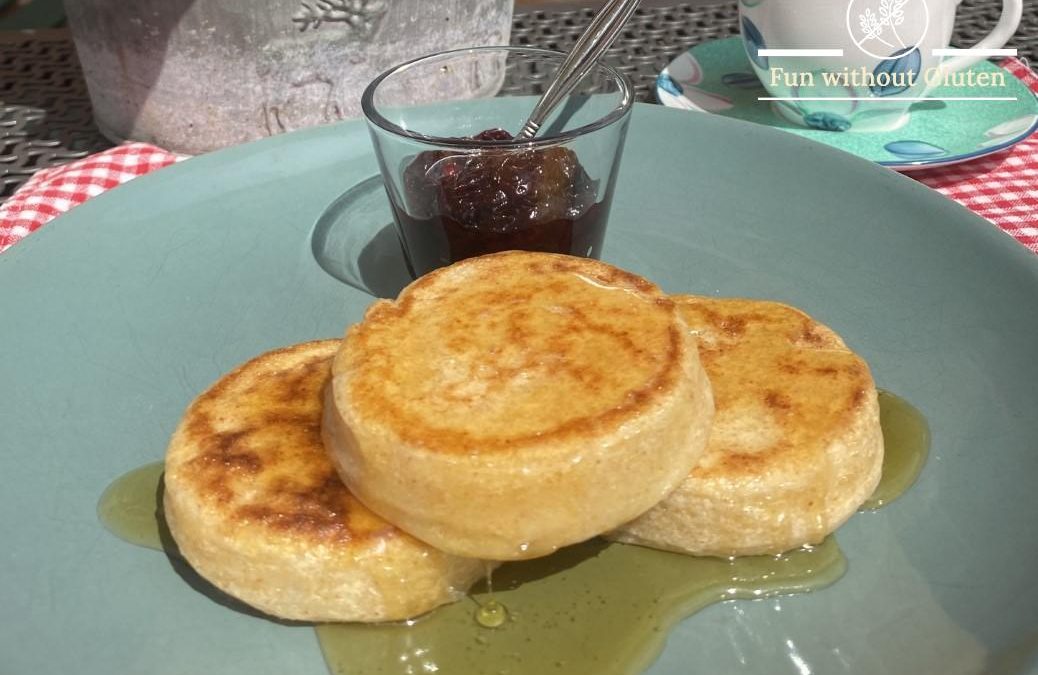 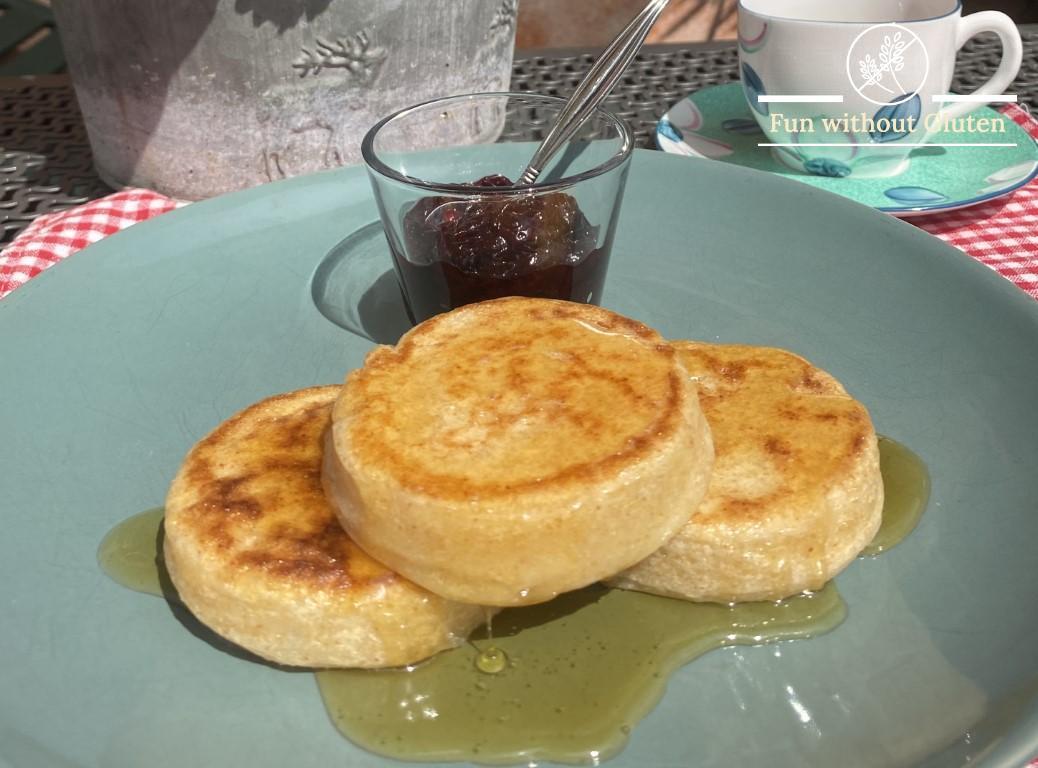 I will be honest, this was the hardest gluten-free recipe to make that appeared like a traditional gluten version, but the good news is that these crumpets tasted amazing, and the texture was very similar to the real thing.

They are similar to a pan-fried English muffin with a crispy base and a soft, airy, spongy top, usually dotted with holes to accommodate lashings of butter, honey or golden syrup.

I love crumpets and after enjoying them for breakfast on many occasions in London, I was determined to make my own gluten-free version. Living in Vienna, there are no Marks & Spencers or Tescos supermarkets around to purchase their scrumptious gluten-free crumpets, so here is a recipe for those missing these breakfast gems.

After six attempts, I finally cracked the code and found this recipe to be the closest to a true crumpet. Needless to say, we are overdosed on crumpets in my home after many tastings, although Kia (our forever hungry dog) was more than happy to sample a few (without the honey butter!).

If you are looking for crumpet rings, I found them on Amazon, although mason jar rings or hamburger rings are perfectly suitable for the job, just make sure you grease them well, so the batter doesn’t stick. 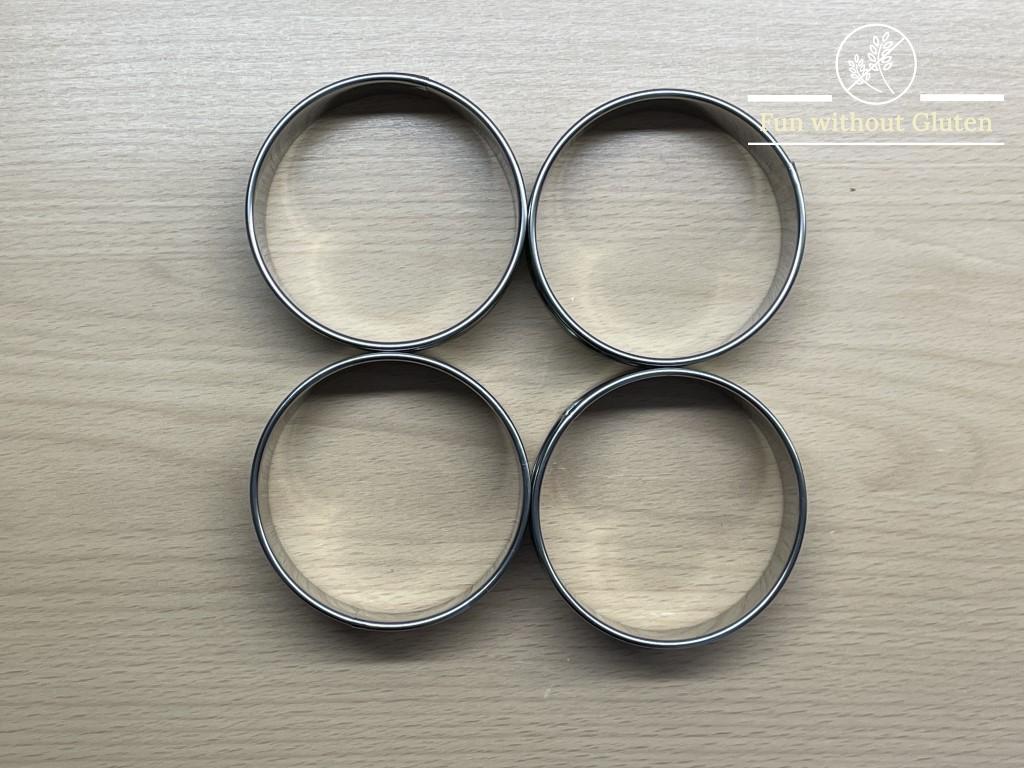 For the honey butter:

1. Combine the flours, salt, sugar, xanthan gum, bicarbonate of soda and yeast in a medium bowl.

2. Combine the milk and water, add this to the flour mixture.

4. Cover with plastic film or a damp cloth and leave to rise in a warm place for at least one hour. Overnight is fine but place the bowl in the refrigerator. 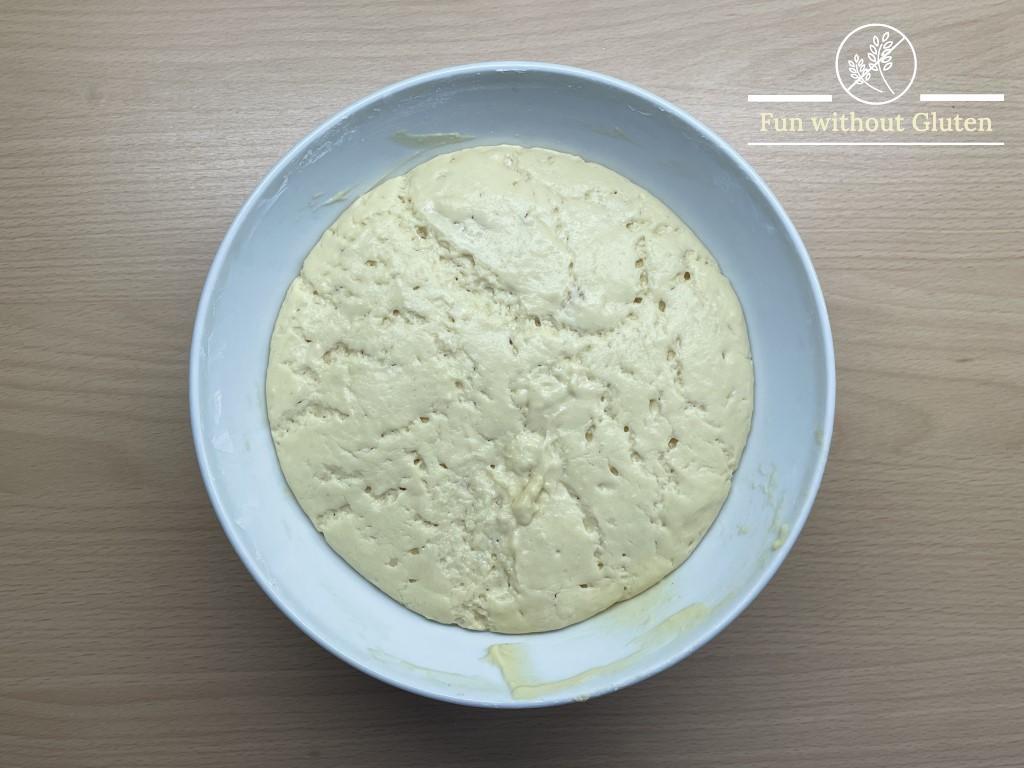 5. Grease a frying pan and the crumpet rings with oil and heat on medium-low for a few minutes to get everything nice and hot for the batter. Make sure the rings are well-greased for easy removal later. 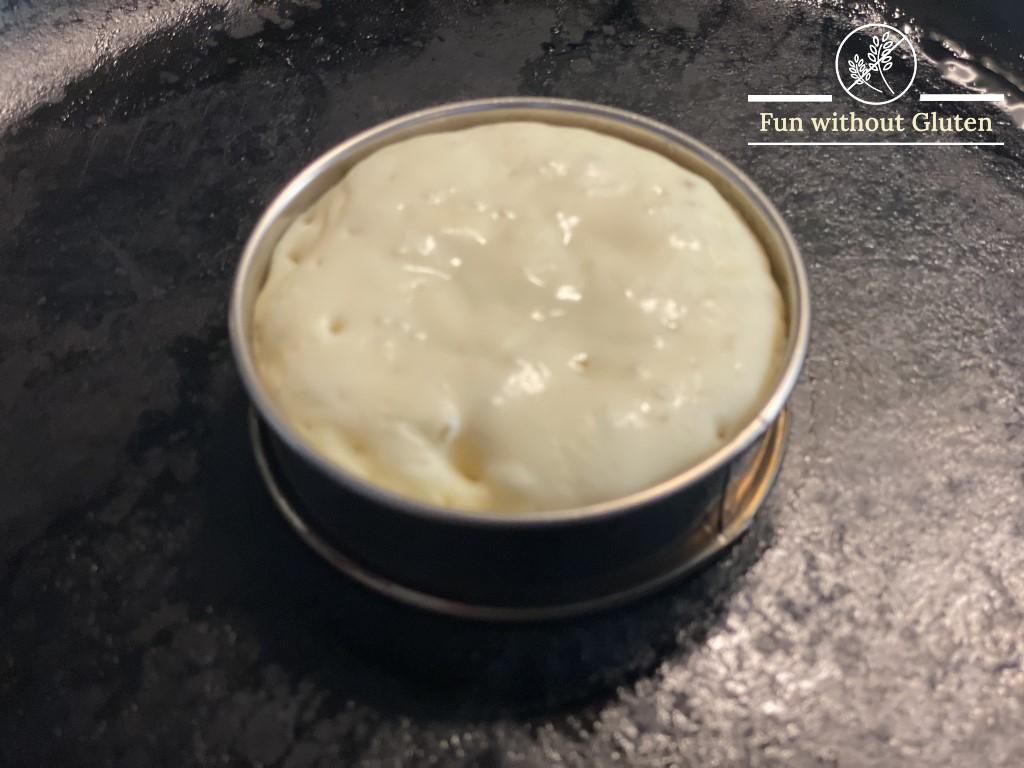 6. Pour a large spoonful of the mixture into each crumpet ring so that they are ¾ full. Try not to overfill as the batter rises significantly.

7. Cook on medium-low for 10 minutes, then increase the heat to medium and cook a further 3 to 4 minutes before flipping each crumpet over and cooking the other side for 2 minutes. Before flipping check that the top is no longer wet, as in the photo below. These heat and time instructions are important to follow to ensure even cooking. 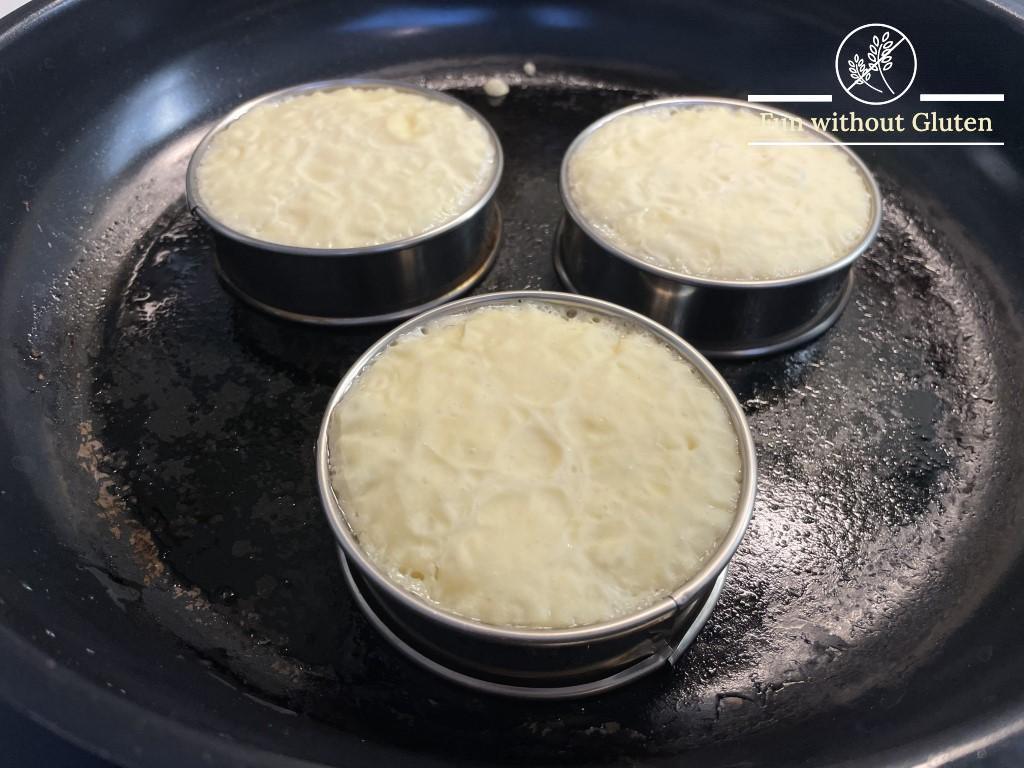 8. If the crumpet has slightly stuck to the ring, release it gently using a knife.

9. Remove and keep them warm by covering with foil. Don’t worry if the crumpet looks a bit pale. Just before eating them, you can always toast them for extra crunch and a more golden appearance.
10. Mix the butter and honey in a small bowl.
11. Serve the crumpets either toasted or untoasted with honey butter. 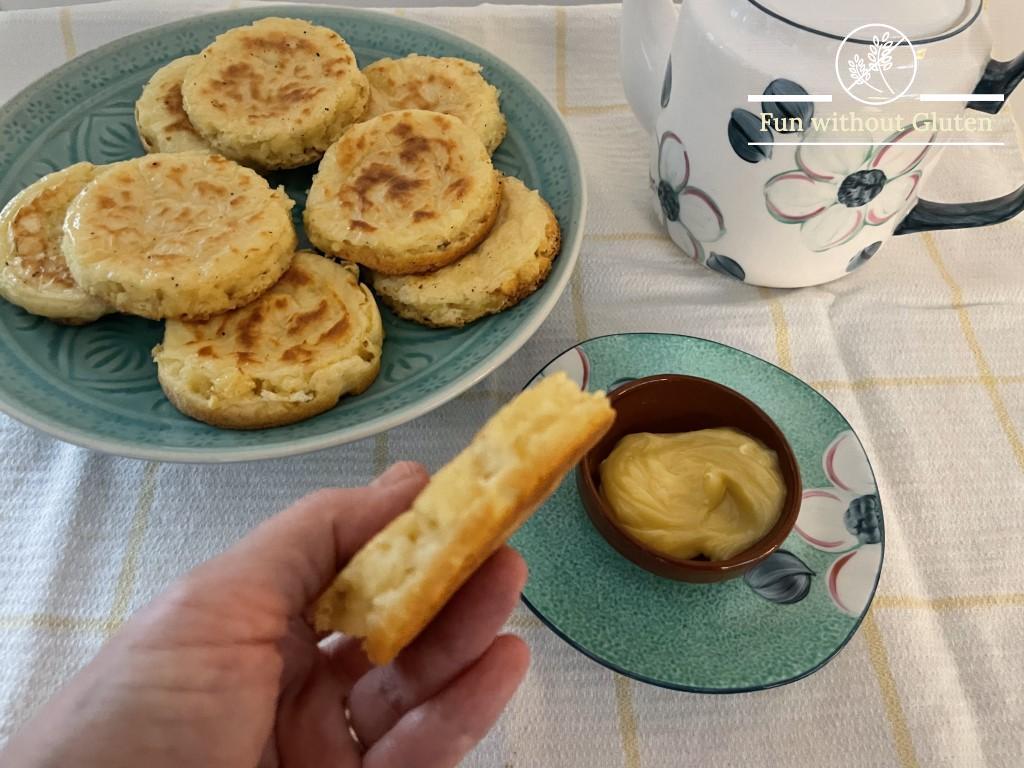 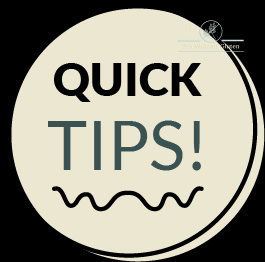 These crumpets freeze perfectly. Toast them directly from the freezer to the toaster. Instant breakfast!