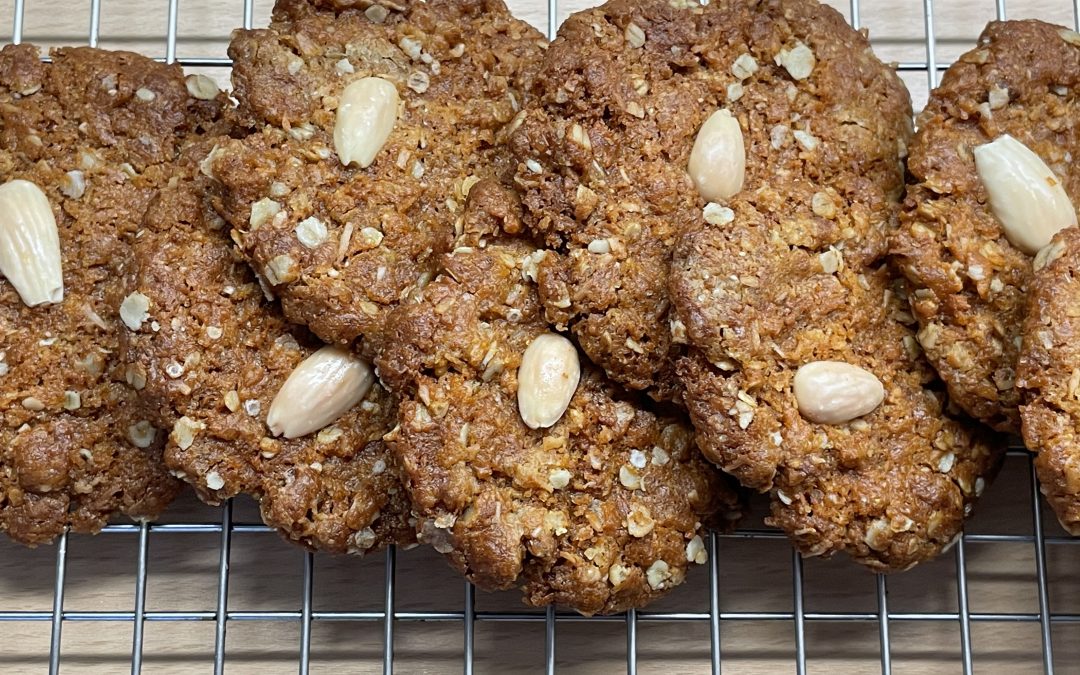 I fell in love with these iconic biscuits while living in Australia for many years.  ANZAC biscuits are a firm favourite for most Australians & New Zealanders who nostalgically have a family handed-down recipe for these chewy, crisp, buttery and robust oat biscuits. Adding golden syrup, an essential ingredient gives it a caramel sweetness and helps binds the oats into a perfectly crisp biscuit.

Why are they called ANZAC biscuits?

ANZAC is an acronym for the Australian and New Zealand Army Corps which was formed in 1915 while the troops were stationed in Egypt. At the same time, back in Australia & New Zealand, the wives, mothers and girlfriends of these ANZAC soldiers were concerned about their nutritional well-being and started brainstorming recipe ideas that could withstand two months of sea travel without refrigeration. Eventually, they converted a traditional Scottish oatmeal biscuit recipe into a sturdier and forgiving biscuit that would fill every soldier’s pocket for that quick fix of home and nutrition.

How are ANZAC biscuits stored? 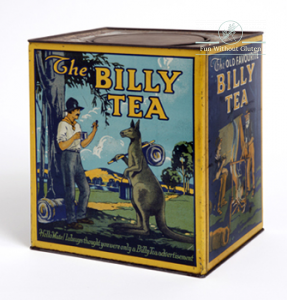 The traditional storage container was a Billy Tea tin. Made from tin with an airtight tin lid, which guaranteed no moisture inside the tin that could soften and spoil the biscuits. To this day, many shops and supermarkets sell this traditional tin with ANZAC biscuits, especially around ANZAC day.

What is ANZAC Day?

ANZAC day is recognised every year on 25th April in Australia and New Zealand. The day starts at the crack of dawn with an official ceremony at a war shrine to remember the war casualties and veterans associated with the landing at Gallipoli on 25th April 1915.

After the ceremony, it is customary to hand out ANZAC biscuits with some warm refreshments.

Nowadays, ANZAC biscuits are sold by Veterans’ organisations and schools to raise money for the care and welfare of aged war veterans. 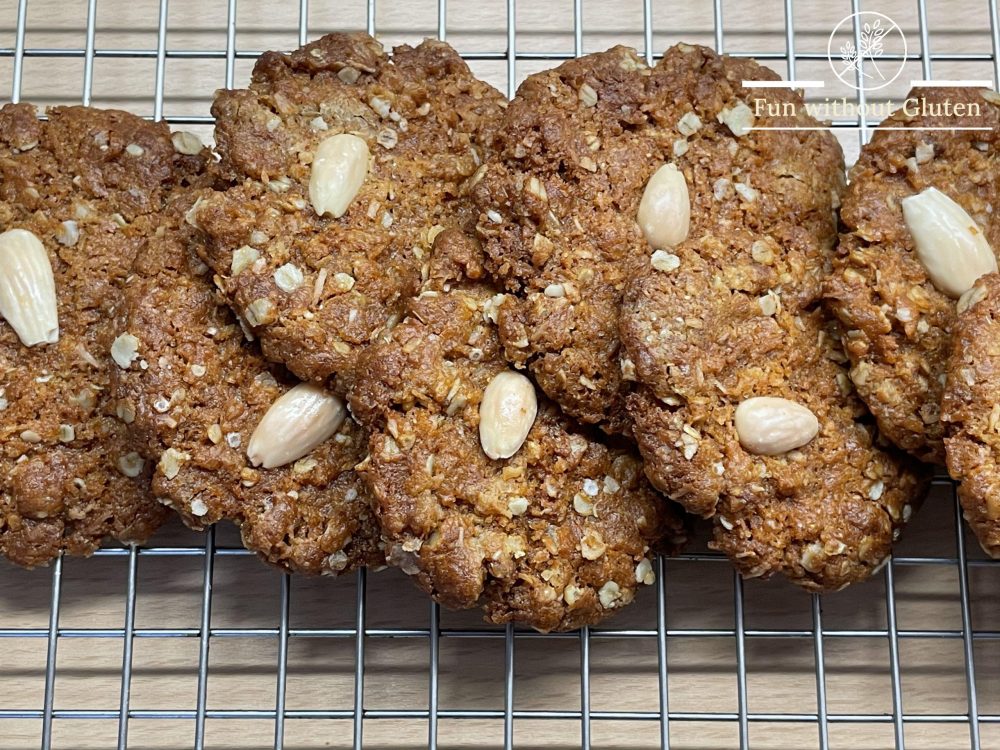 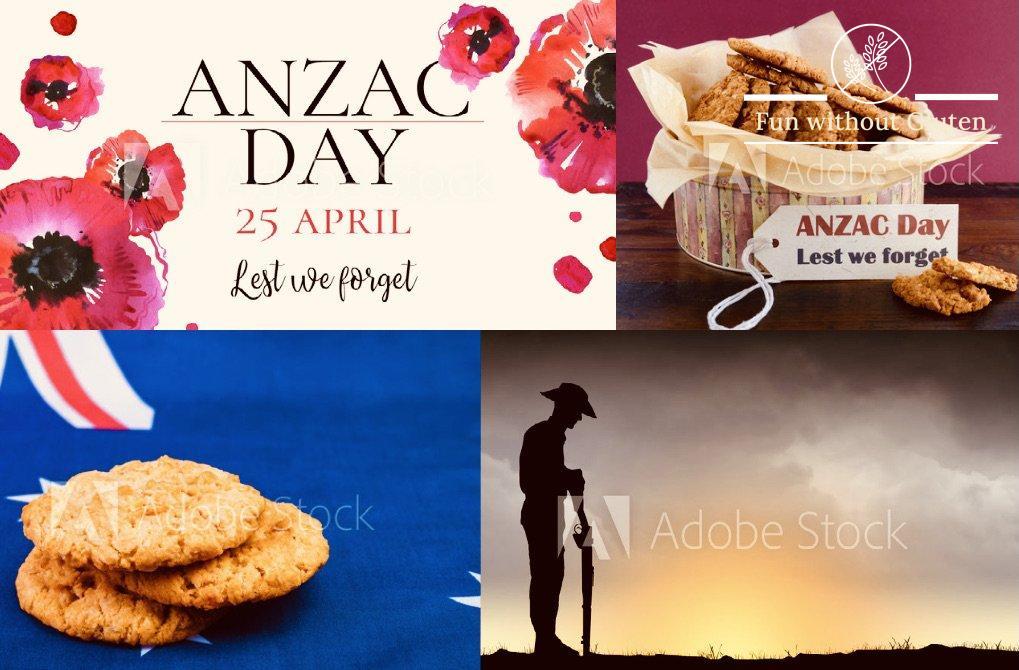 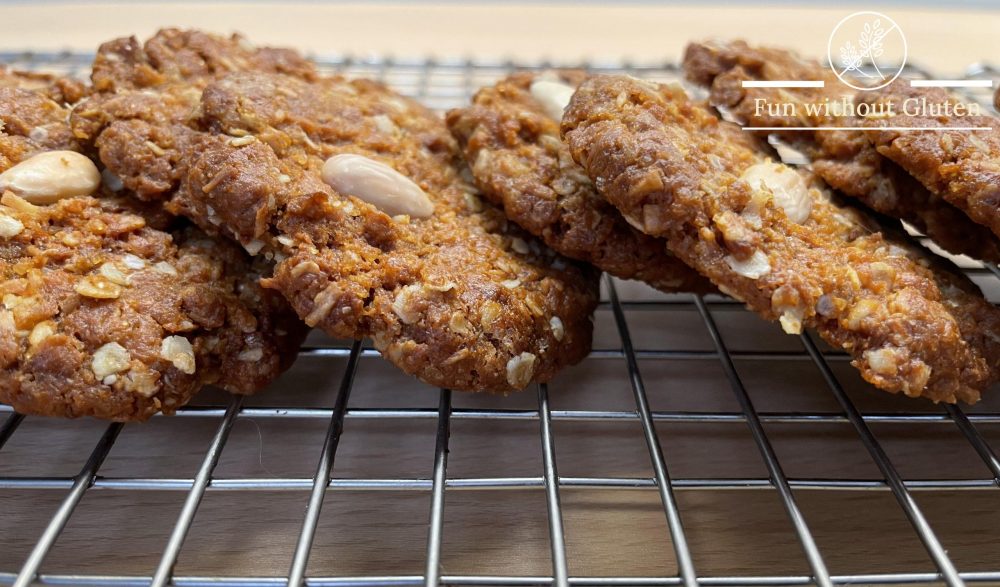 3. In a medium bowl, mix the flour, oats, xanthan gum, coconut and sugar together.

4. Melt the butter and golden syrup gently over medium-low heat in a small pan, stirring occasionally.

5.Turn the heat off. Add the bicarb. of soda and boiling water. Once the mixture has stopped frothing, add the vanilla extract and stir. 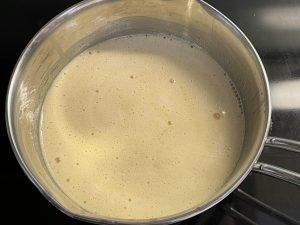 6. Pour the warm butter mixture into the flour mixture along with the vanilla extract. Mix well using a wooden spoon. 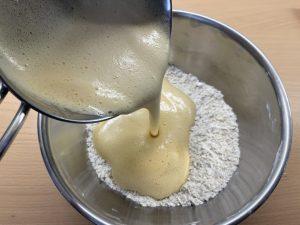 7. Using your hands, roll the dough into small balls resembling the size of a walnut and place them 7cm apart on the prepared baking trays. Press each ball down slightly with the back of a spoon or bottom of a glass. 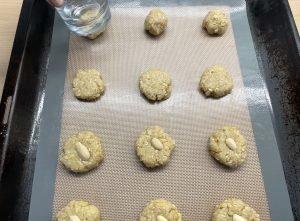 8. If using almonds to decorate, press one whole almond on top of each biscuit.

10. Allow to cool down for 5 minutes on the tray where they will crisp up and harden. 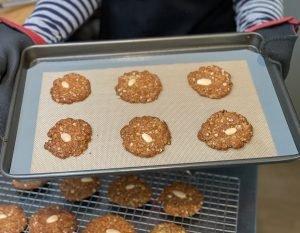 11.Transfer the biscuits to a wire rack to cool down completely before storing them in an airtight container at room temperature.

12. Leave them to cool on the trays as the biscuits will harden up in a few minutes.